Soaking and draining the mixture before cooking prevent the latkes from turning brown too quickly allowing for latkes to become more flavorful.  They can be made a few hours ahead. To reheat, place in oven at 350°F for approximately 5 minutes. 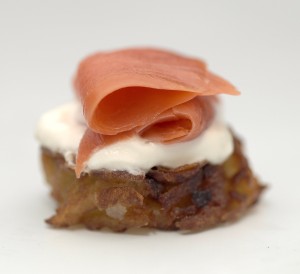 Using thin sliced salmon will make better looking hors d’oeuvres. The crème fraîche can be bought in most supermarkets and should have the consistency of whipped butter.

It’s worth making your own apple sauce for these, chop 3 apples coarsely, add 4 tablespoons of water and a teaspoon of sugar. Boil in a covered pot for about 5 minutes, turn off and leave the lid on until the apples cool down. Once cooled mash lightly with a fork. Serve a generous portion over plain fat-free yogurt. It’s a fantastic breakfast!

Salmon roe or other caviar and crème fraîche 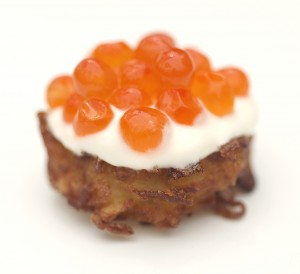 It doesn’t get much better than that…